Technical background: With no broadband, it was complicated to work on large files for a far away client. Film was scanned to 2048×1536 TIFF files (at 24 frames per second) and sent to Kansas City on hard drives via FedEx or Air Cargo. There was no broadband option until years later, so large files had to be sent on physical media. Trinity would send back finished frames to Kuran’s company VCE the same way. Sometimes this required a rush drive to KCI airport to make the deadline! 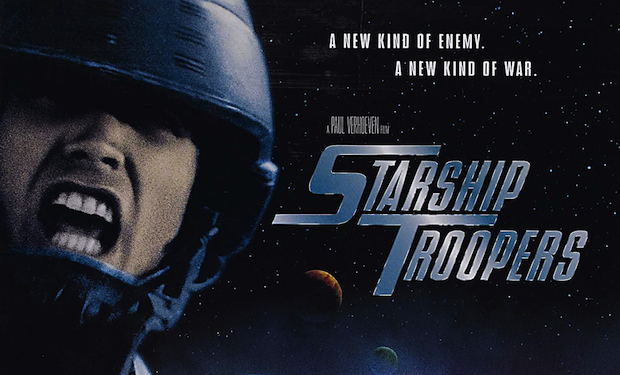 These may be the most important 20 seconds in Jim Lammers’ career.
For audiences watching the new science-fiction movie “Starship Troopers,” the four special-effects shots Lammers created for the film in his Lee’s Summit office may go unnoticed. After all, there are no more than 500 “F/X” shots in the big release about Earthlings battling giant bugs, some of them truly spectacular.
But earlier this week, as he took his seat at an advance screening of the movie, Lammers was a very excited man. After a year of off-and-on work representing 900 man-hours, the owner of Trinity Animation and Visual Effects was about to see his artistry on the big screen for the first time. How would his efforts stack up against the contributions of some of the biggest, most powerful special effects firms in the business?
Two hours and 10 minutes later, as the name Trinity Animation scrolled up the screen during the final credits, Lammers was still happy. The shots he’d worked on didn’t draw attention to themselves. Instead, they seemed so real that in some cases audience members wouldn’t recognize them as cinematic sleight of hand.
“It looked good,” a beaming Lammers said. “And it’s an exciting movie. Our stuff was more compressed than I expected – it went by really fast – but this was definately a good experience.”
His enthusiasm was echoed by Peter Kuran, creator of the light sabers in “Star Wars.” Kuran’s Los Angeles speciel-effects house produced more than 100 shots for “Starship Troopers,” and Kuran farmed out some special effects work to smaller animation shops, including Lammers’.
“I gave him the job because he seemed to have the right attitude,” Kuran said of Lammers. “Not just technical know-how but integrity. And I think his work on ‘Starship Troopers’ was just great.”
The fact that Lammers’ four shots ended up in the final cut means he now has one foot in Hollywood’s door. He’s that much closer to recognizing his dream of creating original entertainment-oriented computer animation.

Jim Lammers’ right brain and left brain get along just fine, than you very much.
“I was heavily into art at Center High,” Lammers said, “and my art teacher was upset to learn that I was going to college to study electronics engineering.”
But that’s what he did, financing his years at the University of Missouri-Kansas City with scholarship money won in a poster design contest.
For several years Lammers put his artistic inclinations on hold and concentrated on technical work. He worked at Rockwell International in Los Angeles, developing a space-based infared optical system for President Reagan’s Strategic Defense Initiative. Lammers loved the work but not the West Coast’s cost of living. He returned to the Kansas City area, built a home in Lee’s Summit, got married and went to work selling and installing factory control instruments and monitoring systems. He played guitar in a rock band in his spare time.
But about six years ago, he began dabbling in computer animation, downloading programs from the Internet. By today’s standards the software was primitive and slow, sometimes taking an entire night to execute an order. But Lammers was hooked.
“That’s when I started thinking that this was the wave of the future,” he said.
He spent $10,000 on a high-tech video recorder so that he could produce tapes of his computer creations. For a year or so he kept a day job while designing computer graphics at night, which he then peddled at local firms.
In ’94 he took the plunge, quitting his job and founding Trinity Animation.
Today the company occupies a three-room suite in a Lee’s Summit office park. In addition to Lammers there is a full-time secretary and a German college student who landed a gig at Trinity as part of an internship program.
Those expecting an awesome display of technology in his offices will be disappointed. The equipment Lammers uses doesn’t look much different than you basic personal computer.
But working in these modest circumstances and employing his artistic and technical skills, Lammers has created some impressive projects.
He’s designed graphics for the Jumbotron at Kauffman Stadium, created animated corporate logos, built Web sites for companies and contributed animated sequences to TV ads for Rolox Windows. (The company has a Web site: www.trinityanimation.com)
“Being in Kansas City is tough,” Lammers said. “The sales skills I learned in my earlier jobs came in handy. I didn’t wait for people to come to me. I had to be a self-promoter.
Some of his best work can be found in “virtual reality” programs he’s designed that allow potential customers and investors to walk through environments that don’t yet exist.
For Butler Heavy Structures, for instance, Lammers has created computer models of proposed buildings, such as an airplane hangar and a large studio sound stage.
One such “previsualization” is of a proposed basketball field house for the University of Southern Alabama. The viewer seems to float effortlessly around the interior of the huge structure. Look up and you can see the girders holding up the roof. Zoom down to floor level and you can see the reflections of the animated players practicing on the lacquered hardwood court. It’s very convincing.
Lammers also has developed previsualizations of Marion Park, the industrial development planned by Hoechst Marion Roussel, and a program that allows McDonald’s franchise holders to design their own restaurant interiors.
“It allows them to fool around with color, wallpaper, tile, floor covering, wall art – the variations are endless,” Lammers said.
For Greg Norman Golf Design, Lammers is developing software that allows potential customers to “play” through as many as 300 holes. The results are strikingly detailed, right down to the checkerboard mowing pattern in the greens. He’s also found time to co-write “3D Studio 4 Beginners,” an unofficial instruction manual for the popular “3D Studio” animation software. So far the book has been translated into several languages, including Russian, Hungarian, and Chinese. And besides doing computer animation, Trinity is a worlwide distributor of 3-D animation software.

Lammers said what he really wants to do is direct. That’s why “Starship Troopers” is so important to him.
“If you can deliver on something like this, the doors open,” Lammers said. “There are lots of people out there who want to be in the business but don’t have what it takes, so the industry tends to be wary of new faces.”
So far as Lammers is concerned, his 20 seconds of “Starship Troopers” is only the beginning.
“I want to do original work, maybe an animated series on cable TV. That’s the goal.”
Speaking from Los Angeles, Peter Kuran said Lammers’ dream is doable: “I don’t think is makes a lot of difference anymore how far away you are from California and Hollywood. A lot of people around the country have the ability and the equipment to do sophisticated computer animation. From now on, you’re going to see a lot more of this.” 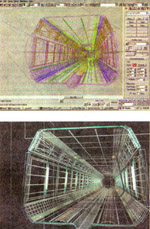 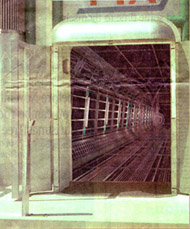 To create a futuristic subway, employees of Trinity Animation first created a “wire frame” perspective of the tunnel on a computer screen, top left. That view was then given an illusion of depth and mass by adding light sources, shadows and surfaces, bottom left. Finally the computer-generated tunnel was composited with real film footage of the subway’s exterior portal, which was built on a movie set, right

The on-screen scenes
Four scenes; 20 seconds of film. Here is a rundown of Trinity Animation’s work on “Starship Troopers”:

Trinity Animation was provided with several seconds of film in which a trooper in the foreground fires his weapon at a distant ridge, which explodes in a cloud of dust and flying dirt clods.
His assignment: to make it look as if the explosion was a mini-nuclear detonation. To accomplish this, Lammers and his then-employee Harley Huggins added several layers of additional elements to the original shot. The combined a fireball, expanding smoke rings and a brilliant flash of light suggesting an atomic blast.

A young woman boards a futuristic subway, which speeds off down a tunnel and out of sight. Trinity Animation received footage of several actors standing in a tiny set of the subways interior. But the tunnel and the exterior of the subway car – including the door that closes in front of the woman – were created in the computer.

Starship troopers race into a large chamber aboard a huge spacecraft. Once inside, a door slides shut, sealing them off from the outer hallway. Trinity Animation received footage of the troopers running through the open door and taking their positions in their muster room. But there was nothing outside the door – just a green screen. Trinity had to create the wall of the outer hallway in the computer

This was a film-within-a-film, a commercial for a psychic being shown on the television of the future. The faux ad features the “psychic” staring at the camera adn suddenly developing a third eye in the middle of his forehead. Trinity Animation was given footage of the psychic. The third eye exists only in the computer.