To date, Trinity’s 3D car animation on YouTube has garnered over 500,000 views. Thanks to Jalopnik, Motor Trend and Yahoo News for making our C7 previz a front page item! 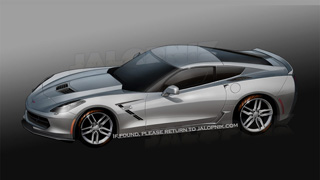 Origins of the Car Animation

In November 2011, Jalopnik posted drawings of what they claimed could be the actual, final new Corvette design, well before the manufacturer had publicly shown the restyled car. Naturally, this caused some controversy, as the drawings depict a radically restyled design with many cues that deviate from Corvette history. A batch of spy photos of the C7 test vehicles (heavily camoflaged) driving in public appeared in February 2012, which seemed to confirm many aspects of those earlier Jalopnik drawings.

So, in April 2012 Trinity started to create a 3D car model that combined the best of everything then known about the likely C7 design, to use in a car animation that we would create for fun.

The video is 100% animated. This process involves virtual “sculpting” the 3D shape of each part of the model as polygons, using a mouse. Next, the artist creates materials in the software that will look like car paint or other surfaces. Environments are built in a similar way to the car model. Next, the software allows the artist to create and place virtual “lights” to light the car and scene in various ways — some that would be impossible in the real world. Finally the images are computed at full quality, a process that may take hours for a single frame. Each minute of 3D car animation consists of 1800 frames, so it can be a big job to compute the final car animation. Finally all these frames are combined with other effects (such as depth blur, glows and flares) and the final movie is produced. 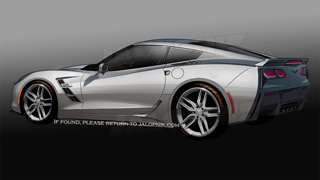 The inspiration for the model came largely from the Jalopnik illustrations. However the Jalopnik illustrations depict a future version of the ultra high powered ZR1 edition. We chose to depict the base coupe and therefore removed the ground effects, rear wheel air intake, extra wide spoiler and hood intake. The spy photos by Car & Driver also give some idea of the LED accent lights in the headlights, as well as confirming the likely wheel design.

The Car & Driver spy photos also seemed to indicate that all the marker and brake lamps would be LED based so we used that as well.

One interesting design cue revealed in the spy photos is the quarter windows that appear behind the main side windows. This would be a new feature on a Corvette, and we think it looks good in this design.

Another feature that seems confirmed from the spy photos is the exhaust configuration – putting all 4 pipes together in the center. You can also see a bit of the tail light shape behind the camoflage, which is the most controversial design element with their squarish appearance. Many of the unique new design cues we expect to see are inspired by great sports cars such as the Ferrari 458 Italia and the Audi R8.

About the 3D Model

Q: Was there anything you had to guess on or had to create for the 3D model that wasn’t in the plans?

A: There were actually a few things we had to create that were not shown in the “spy photos” or the Jalopnik drawings. The interior structure of the headlight was the area that needed the most work.

Q: Have you ever done a speculative car model or car animation like this before?

A: We hadn’t worked on an unknown design for an internally created car commercial like this before, although we’ve built a lot of cars for the animated TV series we work on – the spy comedy ARCHER on FX. We produce all kinds of vehicles in our work as background artists for that show. But they are rarely seen close-up and our background elements are painterized, rather than realistic. So obviously the level of detail and final quality on this Corvette model are far greater.

Q: Did this present a unique challenge from past projects?

A: Yes, this project had unique challenges. There are a lot of wildly conflicting illustrations of the 2014 Corvette from magazine covers, the web, and of course the spy photos and Jalopnik’s illustrations. Ultimately we had to piece the car together and reconcile the conflicts bit by bit. Some bits like the rear vertical parking lights are pure conjecture – they are similar to those cool side marker lamps that border each wheel.

Q: How did you prepare for this project?

A: We reviewed hundreds of Corvette images and videos as well as 3D models of similar sports cars.

Q: What kind of references did you use for the animation?

A: We had to refine the Evermotion scenes’ lighting, materials and settings so we had a consistent look to the overall animation and to get faster render times. The Tunnel scene is the only scene that was built from ground up and we used Google Image Search to find an image of a tunnel I liked, to use as a starting point.  Besides that, I reviewed a number of car commercial videos on YouTube.

Q: How did you guys prepare for this project?

Trinity President Jim Lammers  created and performed all original music for the video. The opening ominous notes are played by Jim on a cello. The bass and drums were also performed live, along with the guitar parts. The rest is sequenced using the instruments that are part of Cubase 6, which is the software used to record and mix the many audio tracks that make up the finished result.

The music was designed to start with a mysterious feeling, progressing to something rhythmic and aggressive.

The car engine sound effects at the beginning were recorded directly from a 2012 Grand Sport Corvette.

Q: Are you connected with General Motors or Chevrolet or Corvette?
A: No, we are just car enthusiasts that wanted to prognosticate. We have no special information. Everything is derived from public sources. The real final C7 2014 Corvette is expected to be revealed to the public by General Motors and Chevrolet in January 2013 at the Detroit Car Show NAIAS.

Q: I hate it! I love it! It won’t look like that.
A: We are just artists making some images of what it might look like. We do like the design as it appears in our car animation, but we don’t know yet how close we were to the real thing. We hope that however the new Corvette appears, it will be a big hit! If you enjoy speculating (and arguing) about it with other enthusiasts, check out Jalopnik and the Corvette Forum and Digital Corvettes! Also Corvette has a great official Facebook presence with nearly a million fans connected.

Q: Is any of the animation from video or photoshopped pictures, or live action you filmed?
A: No, every frame was made using 3D software, compositing software and many hours spent by talented artists. Not a bit of it ever existed!

Q: What software did you use? What hardware?
A: The software is 3DS MAX 2013 from Autodesk. For lights, materials and rendering we use the VRay renderer by Chaos Group. The music was recorded using Cubase. The scene elements were combined into a final movie using Adobe After Effects CS5.5. Many of the environments were derived from scenes made by Evermotion. All of this software runs on PCs running Windows 7. Our animators also use theSpace Pilot Pro for 3D interaction.

Q: How detailed is the model?
A: It is about 3.6 million polygons, total

Thanks to Jalopnik.com and Matt Hardigree for their inspirational artist’s illustrations of this car.

Rendered with VRay by Chaos Group

“Corvette” and the checkered flag logo are registered trademarks of General Motors.

– Disclaimer –
The animation is an artist’s simluation of what the 2014 Corvette might look like. The creators of this animation are not connected with GM or Corvette in any way. The design of the vehicle depicted in the animation is based on public illustrations and photos, and our own conjecture of how it might look.

[much of this content was originally posted on the site www.myc7.us]