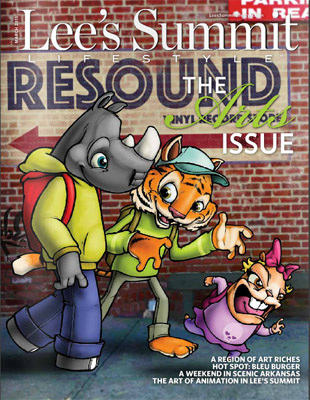 This article on midwest animation studio Trinity Animation was published in the March 2015 issue of Lee’s Summit Lifestyle Magazine. 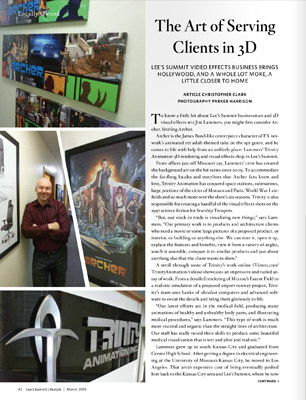 THE ART OF SERVING CLIENTS IN 3D

Archer is the James Bond-like centerpiece character of FX network’s animated yet adult-themed take on the spy genre, and he comes to life with help from an unlikely place: Lammers’ Trinity Animation architectural rendering and visual effects shop in Lee’s Summit.

From Lammers’ offices just off Missouri 291, Lammers’ crew has created the background art on the hit series since 2009 from their midwest animation studio. To accommodate the far-flung locales and storylines that Archer fans know and love, Trinity Animation has conjured space stations, submarines, large portions of the cities of Monaco and Paris, World War I airfields and so much more over the show’s six seasons. Trinity is also responsible for creating a handful of the visual effects shots on the 1997 science fiction hit Starship Troopers.

“But, our stock in trade is visualizing new things,” Lammers says. “Our primary work is in products and architecture _ clients who need a movie or some large pictures of a proposed product, or interior, or building or anything else. We can tour it, open it up, explain the features and benefits, view it from a variety of angles, watch it assemble, compare it to similar products and just about anything else that the client wants to show.”

A stroll through some of Trinity’s work online showcases an impressive and varied array of work. From a detailed rendering of Mizzou’s Faurot Field to a realistic simulation of a proposed airport runway project, Trinity’s team uses banks of ultrafast computers and advanced software to sweat the details and bring them gloriously to life.

“Our latest efforts are in the medical field, producing many animations of healthy and unhealthy body parts, and illustrating medical procedures,” Lammers says. “This type of work is much more visceral and organic than the straight lines of architecture. Our staff has really raised their skills to produce some beautiful medical visualization that is wet and alive and realistic.”

Lammers grew up in South Kansas City and graduated from Center High School. After getting a degree in electrical engineering at the University of Missouri-Kansas City, Lammers moved to Los Angeles. That area’s expensive cost of living eventually pushed him back to the Kansas City area and Lee’s Summit, where he now lives with wife Gail and runs Trinity.

While he enjoyed art in his younger days, Lammers started his adult life in engineering, figuring even commercial art couldn’t produce the lifestyle he wanted. But that was before he found the 3D rendering tool called Vivid. The software, he says, was “a revelation.”

“It took all day for a computer of that era to render even a simple project, but all the shadows, reflections and refractions were perfectly depicted – wow!” Lammers says. “And the computer did the hard part, where previously with airbrush or watercolor, I had to hand mask and paint each detail. I loved it and kept playing with it on weekends and evenings. Eventually I started to think of it as a way to do freelance illustration and animation.”

After the pair married in 1994, her career as litigation attorney for SAFECO, a nationally ranked insurance company supported the household while he leapt into the visual effects business, founding the first dedicated Midwest animation studio. Today, she runs a division of Trinity that focuses on mechanical engineering software and training.

As the business grew, Lammers resisted the allure of downtown Kansas City, which has come alive in recent years largely because of the creative advertising and marketing community that’s set up shop there.

“For me it was more important to have the business somewhere close to my home since I would be there often, and at odd hours,” Lammers says. “Also I prefer a gentler suburban environment in general. Several of our employees are graduates of Lee’s Summit schools. We’ve been blessed to have such a great array of local talent when we are seeking to add artists or other employees.”

The market for Trinity’s expertise is immense when you consider all the possible applications for 3D rendering and visual effects, Lammers says. Need a visual of something that’s difficult to film? Consider 3D, he says.

“It may be something far away or very tiny, or it may not exist yet. Also in some cases it is just hard to film there. For example, we have helped companies with medical and airport furniture marketing imagery because hospitals and airports are nearly impossible to gain access to for photo shoots. People would probably be surprised to learn that virtually all the auto marketing brochures are now 3D rendered images, because the brochures must be made before the vehicle production line has started.”

Trinity Animation’s clients are local, regional and even international. As one of the largest midwest animation studios that takes work from all incoming clients, Trinity Animation is called on for projects from a wide variety of clients. Their range of work – from animated series to industrial design – underscores the firm’s broad talents.

“It’s something our artists appreciate and enjoy,” Lammers says. “They have new challenges and new styles to master all the time.”