This year’s Christmas card cover displays an immaculate closeup image of a 3D hyper-realistically rendered Christmas sweater, which features a pattern consisting of reindeer, Christmas trees, and the words ” Trinity Animation”. Trinity shows off their ability to create hyper-realism inside of 3D software by displaying a close-up shot that incorporates small details in the texture of the material, such as the tiny fibers that are illuminated by the light. 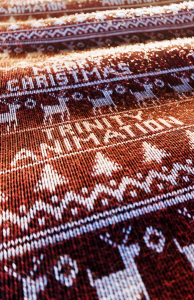 The inside of this year’s Christmas card displays a classic living room scene based off of the popular holiday movie, “National Lampoon’s Christmas”.  The space is filled with references from the movie if you look closely. For instance, the too tall Christmas tree that is smashed against the ceiling or the burned imprint of the cat into the carpet on the bottom right-hand corner. Each character is carefully posed in a manner that conveys energy and movement into the still image. Trinity’s Christmas cards always capture a moment right before a disaster is about to occur. This time characters are displayed mid-fall after an attempt to place the star on the top of the Christmas tree by stacking on top of each other.

If you look closely, you will notice that everyone’s Christmas sweaters are uniquely personalized for them based on their interest. In the close-up shots below, the detailed elements on the sweaters are displayed such as Darth Vader from “Star Wars”, the Royals baseball team, the pi symbol, guitars, and more. Another detail that Trinity included, are the pictures in the background, which display past Christmas cards that Trinity Animation created. 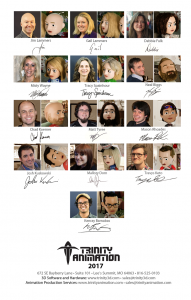