(As written by Jim Lammers for Animation Magazine, November 2011) 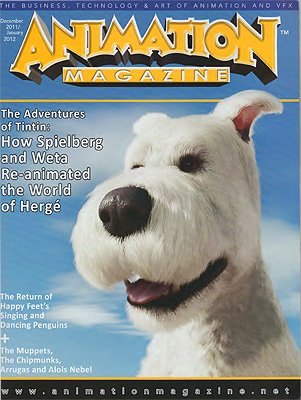 Super spy Sterling Archer lives in a timeless netherworld that is part 1960s-style cold war and part pop art intermixed with modern trappings like cell phones, internet, and video players. Archer’s world also appears to be shot like a movie, with unique camera angles for each shot to help move the story forward. This is possible due to Atlanta production house Floyd County’s choice to use 3D environments for the show animation backgrounds. Rather than use traditional cel animation’s flat panoramas for pannable backgrounds, or completely switch to a purely 3D approach, the Archer animation process has taken a unique hybrid approach that blends 2D characters with 3D environments. Now beginning its third season, the show has been a breakout comedy hit for Fox’s cable network FX.

The show’s art style uses a realistic representation of human shapes and movements, eschewing squash and stretch and all other unphysical exaggerations, so the more literal computer animated backgrounds jibe well with the characters. Art director Jeff Fastner explains: “It was always Adam’s (Reed, Archer creator/writer) intention for the show to have these characters based in a more realistic world. It helps to define and push the reality of the series.” The Archer animation process uses Adobe Illustrator and After Effects, starting from photography of costumed models to create the show’s characters.

Having developed techniques for both characters and backgrounds during production of the cult hit Frisky Dingo (which aired from 2006 to 2008 on Adult Swim), art director Neal Holman knew that the environments for this more complex show would present a challenge. “For Frisky we actually scouted Atlanta locations and secured permissions for photography/broadcast on many of the animation backgrounds. We would then process the photography for a painted look.” With Frisky Dingo set in the present day and scripts that occurred in ordinary settings, this approach was effective for the 11-minute episodes. However, when Archer’s pilot moved forward in 2008, Holman expected to switch to a traditional painted background approach since there were so many sets of such indeterminate date, and the shows 23 minute length meant many more sets. When this got off to a slow start, Holman used his own 3D talents to prove a point: “I had done several backgrounds in 3-D for Frisky Dingo, so I knew that process of painting over the renders was one that could work. I built Malory’s office over the weekend, shot a test render to (Backgrounds Director) Eric Sims and by that Monday, we had a process we were all in love with.”

The 3D environments take more time to develop than a simple painting or other 2D animation backgrounds, but once produced they allow for very low cost for any additional angles, variations, and color schemes. Finished sets can be saved so that it is also inexpensive for a future episode to return to any previously built set, even when new angles or paint schemes are required.

As the show moved from pilot to production it was clear that there would be a lot of 3D work to do. Floyd County surveyed its options and ultimately awarded the 3D production contract to Kansas City-area animation house Trinity Animation. Trinity was able to meet the demands of fast-turn, low-cost, and high-quality, starting with its first test set — the Hitleresque KGB office of Nikolai Jakov. Trinity’s diverse experience of architecture, product simulations, and technical presentations helped with the unique requirements of the show as well as its fluctuating labor demands. Complex and highly detailed worlds have the potential to compete with the characters, especially when camera techniques like depth-of-field (distance blur) are not generally used. The paint process allows the hybrid techniques to blend visually. Neal Holman relates that “the thick, black outlines of our characters keep them from being overwhelmed by the detailed animation backgrounds. Our painting process has evolved from the pilot in a lot of subtle ways to keep them sharp without taking attention from the characters.”

Going 3D with the environments makes for new challenges but gives new freedom for creativity. Movies are usually made with a single camera, repositioned shot by shot for the best ways to draw in the viewer and tell the story. The rapid pace of producing for television mean that live action shows are often shot in a near-live approach where a director picks the best angle of three mobile cameras as the scene unfolds in real time. The much slower methods of making an animated series make it even more risky to include a large number of unique and original computer animated backgrounds but Holman and Fastner have found it liberating. Holman explains, “Once an environment is built, I can move my camera anywhere I want, with any lens I want. Once rendered, a finished paint of that background can be done in three hours. For a recent episode that was in an entirely new environment, we had 143 different shot setups. We could not have done that using the traditional process on our current schedule.” Jim Lammers is President of Trinity Animation, an Overland Park-based firm that has provided animation and graphics to clients worldwide since 1994. Lammers holds a bachelor of Science degree in Electrical Engineering from the University of Missouri. Trinity Animation has created animation backgrounds for Archer, Unsupervised and Chozen. He is also the author of several books on animation for Pearson Publishing.